Blog the Twenty-second: On What Antipasto is. 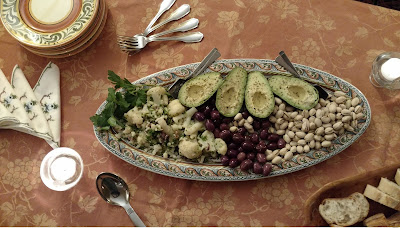 The name antipasto originates from ante pastum, Latin for before the meal (and not before the pasta, so it’s still antipasto even if you’re not having pasta for a first dish).  When I was a kid, it never occurred to me that the stuff I noshed on to take the edge off my hunger while waiting for the pasta to boil was antipasto.   The Italian fridge and cupboard offer a delightful variety of noshers, and half the pleasure is to see what a little digging will turn up.  This pleasure of the tasty tidbit in advance of the meal proper gives the true origin and spirit of antipasto.  It’s more a foreword than an introduction, a little something to tease appetite, flirting with it rather than wooing it, and like a flirt, inventive, improvisational, opportunistic.

The sort of antipasto served as a first course at a sit down meal seems to me a machination of the restauranteur and caterer, and when I was a kid that caterer’s first course was what the word antipasto was reserved for.  Knowing the half dozen courses our holiday meals at home ran through, I couldn’t imagine what of Nature’s species of pleasure was left to add on.  When I was told that you might be served prosciutto on melon, for example, such a miscegenous coupling of luncheon cold-cut and postprandial fruit struck me less as an invention of fancy than a creature of decadence.  To this day I think this combination of a wet summery-sweet fruit with a dry winter-cured meat incongruous, more likely to interest a jaded palate than satisfy a seasoned one.  For that matter, I think moist mortadella a better match with fresh mozzarella, and at a quarter of the price of prosciutto. 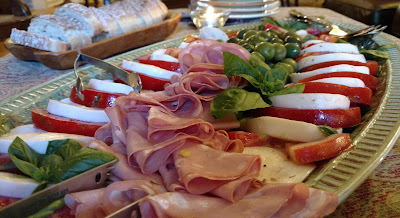 These days, the antipasto we have at home on holidays is usually eaten hanging out in the kitchen or lounging in the living room.  It is laid out for new arrivals to dig into as soon as they like, without ceremony.  I remember thinking it the height of discourtesy when one Thanksgiving a Gentile in-law who had been delayed two hours by Thanksgiving traffic, upon arriving and finding that we had gotten started on antipasto and champagne, threw a tantrum, thinking it the height of discourtesy in us not to wait for them to start.  Apparently she thought her pleasure in an inaugural toast was well worth our being tantalized by the sight of food and bottles untouchable until she should arrive.  It reminded me of yet another Thanksgiving when my Gentile host had us keep watch for a half hour over the platter of antipasti I brought, sitting in our midst on the coffee table as we sipped cocktails round about it, before he ventured to sample something and give the rest of us the signal to begin.  I felt like I had been hired by a choreographer for a pièce du scene.  Such restraints of formality are alien to the Italian way.  Italian customs aim to stimulate and gratify your appetites, not restrain them.   The idea is to enhance the joy of eating.
Read more »
Posted by T. at 7:05 PM

Email ThisBlogThis!Share to TwitterShare to FacebookShare to Pinterest
Labels: ANTIPASTO

Blog the Twenty-first: Is it really Eggplant alla Parmigiana, or rather alla parmiciana?


Fact is, no one knows—which only goes to show how uninteresting facts really are.  At best, if well chosen, they’ll point out what needs explaining, but they rarely explain it.  They may speak for themselves, as the saying goes, but they don’t have much to say about anything else.  Mostly they just assert themselves, as things needing to be explained.

A true fact can be a right answer, but a right answer isn’t a reason why.  A reason isn’t just another fact [lest we end up with an endless train of facts and no explanation …], but rather a relation between facts—as of a cause to its effect, or an intention to its end, or a source to its issue.  At best, facts supply the matter of an explanation which, by relating them aright, reveals the truth of the matter.  But as any good liar well knows, you can arrange facts as well to occlude as to reveal the truth.  What you need to tell the truth, more than the facts, is a good story.  There’s an Italian saying, Sed non è vero, è ben detto—“If it’s not true, it’s well said.”  What should happen sometimes tells the truth better than what does happen.

Case in point:  I’ve always been perplexed by Eggplant alla Parmigiana’s being called alla Parmigiana, i.e., Parma-style—Parma being North Italy’s celebrated capital of Parmigiano-Reggiano.  But eggplant parmigiana (dropping the alla in English, with compensatory decapitalization) seems so very southern:  sun-loving eggplant topped with zesty red sauce, oozing sweaty mozzarella—for which South Italy's Campanian buffalo are so famous—and showered with gratings of tangy Pecorino Romano. What do Parmesan cows have to do with any of that, I ask myself.

So I start working up a diatribe against the pretensions of the Parmesans, about how the true origin of a thing should be credited to its final perfecter rather than its first confecter; that it is not its factual birth that reveals its true nature, but its full flowering; that, whatever inchoate beginnings this eggplant dish may have had among the Parmesans, its true form was clearly achieved in South Italy and disseminated thence throughout the Americas by its emigres ….  You get the idea.