Blog the Fourteenth: On Cabbage Barbary

Red Cabbage, why bother?
Why red cabbage?  It demands explanation, because my people have a cabbage of their own, Savoy, and my mother knows how to make it very delicious.  At the grocery store, Savoy beckons with its glowing visage of chartreuse undulating to creamy white over a voile of curly ripples.  When you get it home and cut it open, a hundred giggles break out from its twin amphitheaters of nooks and crannies.  Vouchsafe it much onion, a little tomato pulp and broth, and this genial cabbage rejoices to return you steamy savory comfort.  (So different, the leathery grey-green cannon-ball sitting beside it in the market, best fit for boiling with corned beef and potatoes one day a year, in honor of a saint.)
So, I think an apology for my willingness to cook red cabbage is called for—an apology not in the colloquial sense of an admission of guilt, but rather in the classical (and paradoxically opposite) sense of self-defense.  To begin, you must grant me that the RED of red cabbage arrests the attention.  That granted, if one takes as one’s major premise, that the universal imperative of Nature is to paint the dinner plate GREEN, WHITE, and RED (and the red cabbage looked great on the plate last week with beef cutlets breaded and fried and broccoli lemony); and, further, cognizant of how difficult a RED for one's plate can be to come by at times in the market, one grants, for the minor premise, that this food is RED as RED can be; how can one not draw the conclusion, It must be cooked? 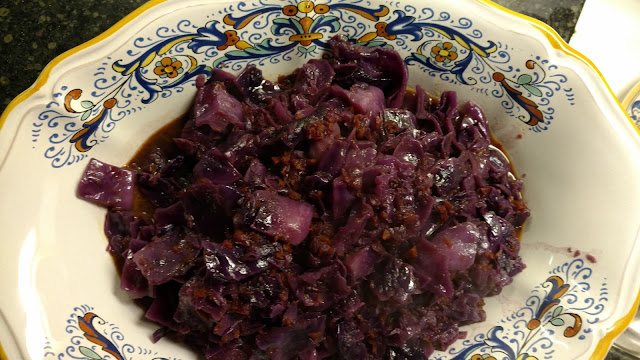 Alas, logical necessity is one thing, and practicability another.  No genial cabbage, this.  It is armored against assault by storm, paw, and tooth.  It is contracted as densely as a rock, as if for indefinite siege, and when with a great knife and strain you cut it open, it seems to draw itself in yet tighter against your mortal stroke, its arteries looking readier to pour blood  than surrender. In cooking, it begrudges you its flavor and color, turning grey and bland, to render your victory over it Pyrrhic.  It is stubborn, tight‑fisted, and diffident.  It is northern.  Why bother with it?


I like to say that I hate kids, dogs, and vegetarians, and all for the same reason, because they ruin dinner.  If only the vegetarians would baby-sit the kids and dogs, the rest of us could eat in civilized fashion.  One of the reasons this is fun to say is that it’s socially acceptable.  On one hand, everyone knows its true;  on the other hand, people nevertheless think you can’t be serious.  In a way, they’re right that I’m not serious.  I actually like most kids, and most rather like me (so much so, that if one doesn’t, there’s likely something wrong with them, I always figure).  It’s the helicopter parents of our day that I don’t like, but that’s too credible to say in a socially acceptable way, so I blame the kids and dog instead, and the parents are fine with that.

As for the vegetarians, last time I said this in class, the President and Vice President of the school’s vegetarian club happen to be in attendance, and the next day the V.P. brought me a D.V.D. about the merciless treatment of animals by the meat industry.  I told him, “You see, this is just what I mean—you’re trying to ruin my dinner, aren’t you?  This D.V.D. is just performative confirmation of my complaint.”  He looked at me with such Ghandian forbearance, I had to promise to watch the video anyway, which ruined my joke as well as my dinner.

Blog the Twelfth: On Roasting a Kid with Potatoes and Onions


Well, we ended up having kid-goat (a.k.a., capretto) on Easter Sunday after all.   My Brooklyn aunt had already special ordered it with her butcher, and she didn’t want to cancel the order, so my mother returned to Jersey from her Brooklyn shopping spree with a plastic shopping bag heavy with half a kid-goat, chopped up into a motley assortment of bony parts, all cozied together in brown paper wrapping.  The baby pink flesh was so beautiful to see and so tender to touch!

I’ve decided to tell you how we roasted our Easter kid with potatoes and onions, because you can do the same with chicken parts, and it’s delicious.  Nor, mind you, is a blog on roasting Easter kid belated, since it’s still officially Easter.  Easter is the Christian Passover, and in imitation of Passover, it is an eight-day feast (or octave), stretching from the First Sunday of Easter to the Second Sunday.  As ever, Christianity finds a prophetic meaning in the Mosaic number:  Jesus’ rising from the dead on the first day of the week is the eighth day of creation, for as God created the world we know in seven days, on this eight day, through the resurrection of Jesus, he creates the eternal life of the world to come.  So, it’s still Easter, and you’re still in time to roast your kid.

As I mentioned, capretto is traditional in Sacco, and with both my mother’s brother come from Switzerland and her sister from Brooklyn, a colloquium about the best way to cook it was inevitable.  I suspect that you, Gentle Reader, are liable to misunderstanding my people’s culinary rigor.  You might think that our insistence on the eidetic demands of Nature’s culinary kinds would lead to a tyrannical regularization of our recipes and an intolerance of variation or innovation among us, à la Haute Cuisine.  Quite the contrary, because we believe the eternal forms to be eternal, we know our temporal imitations to be but temporal.  The intraversible distance between their perfection and our confections leaves much room, nay, infinite room, for controversy about how best to incarnate the eternal in the kitchen.  And, indeed, much discussion was had this Easter about how best to roast a kid.