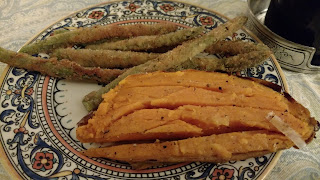 “Did you know that the sweet potato is not in fact a potato? It belongs to the family of Morning Glory, whereas the potato is a member of the Nightshade family. The potato’s fruits and leaves, like those of its siblings, the tomato, the eggplant, and tobacco, are poisonous to eat. Not so the sweet potato’s, whose leaves may in fact be boiled as a vegetable.”
That’s how I was going to start this post, until I came to my senses. It’s only that blind faith in modern science, to which we are all involuntary heirs, that made me trust Science Guy’s Wikipedia entry more than my own senses—not to mention common sense. But this is how it’s been since the inauguration of Science Guy’s experimental method in the 17th century. We’ve been trained to not trust our senses until they’ve been verified by his experiments, and he has given us to expect experimental contradictions of our sense experience regularly. So, if Science Guy tells me the earth in fact goes around the sun, then I chortle at the benighted centuries that thought the sun goes around the earth, even if that’s what I myself see every day. And if Science Guy tells me I don’t catch my colds from the cold, I educate any ingenuous friends who think so on the strength of spurious correlations of etymology or personal experience. And if Science Guy tells me that a sweet potato is not a potato, then I marvel at that fact in my blog. But is that a fact?
Read more »
Posted by T. at 10:51 PM