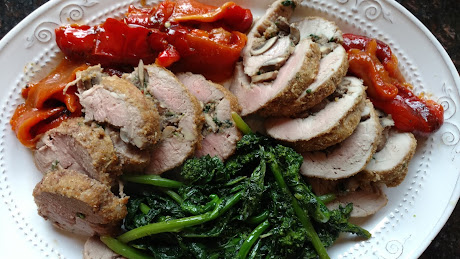 This long awaited post is devoted to recrimination and disclaimers. Reader's discretion is advised, as there is little in the post.

First, let me disclaim this recipe for pork tenderloins rolled with mushrooms, because it’s mine. As you know, Gentle Reader, I eschew both individualism and innovation in my people’s cooking, as the slippery slope to gentrification. For this reason I attach the recriminatory label Barbary to recipes of my own invention, borrowing the traditional name of those trading ports where all manner of exotica hook up with things native and miscegenate.

And it is on this point of miscegenation that I want to recriminate. It seems to me that when one of my people marries a Gentile, you know you're in for ribbing, and it’s quite ridiculous of you to take any offense at any caricature I proffer of you or yours in this Blog about our people, because it’s a caricature. Caricatures are funny because they’re distortions, offered not as insults, but as alternative truth. A good joke always tells the truth, just not literally. Humor has its own way of telling the truth, and ridicule is its way of masking it. For you to take the ridicule personally quite misses the point, because you aren’t the point. Get it? You’re just the comic mask with which I’m masking some social critique, or just as often, some self-critique of my culinary chauvinism, itself an oblique critique of a prevailing relativism. It’s a hall of mirrors.  Have fun in it.