Why is it you can get a Gentile to eat squid if you call it “calamari”?  I live in a hard-drinking sailor town where peoples of northern European stock hold sway, and their frequent devotions to nectars of the grain are as likely to be accompanied these days by fried calamari rings as by fried onion rings.  It’s not as if the foreign name renders unrecognizable those tentacles winging the plate, and it’s a small step for imagination to reassemble the “rings” into a squid torso.
Plenty of people who will eat “calamari” won’t touch a fish cooked whole with its head on, as is done throughout the Mediterranean.  I used to think this childish, but lately I’ve been feeling moralistic about it, perhaps under the pressure of the bourgeoning vegetarian populations upsetting my culinary ecosystem.  That blank bovine stare they adopt at table as I chew my flesh and they their cud strikes me as judgmental.  I have a college buddy who worked in a slaughterhouse one summer, and he likes to say that he feels he has the right for life to put his hand to meat with a clear conscience, having wielded the stun gun with that same hand.  A fortiori the bar of moral vindication seems set pretty low if you’re expected to look your dinner in the eye when it’s already dead by someone else’s hand, and especially if there’s a jury of vegetarians watching for any wincing of conscience.
This is my first fish blog.  I ate a lot of fish growing up, and a lot of it before I liked it, on Fridays, and often also on Wednesdays.  When it comes to fish, you have to take “the food of my people” in the extended sense that extends to my father’s people back in Sicily, because as my father likes to say of my mother, “She’s from the mountains—what does she know about fish?”  We have friends of the family likewise from Sicilian shores, or else Naples, who “know” fish.  True, my mother’s father did use to take bus rides to Salerno and bring back fresh fish, but that was only an occasional treat, and the most beloved recipe of my mother’s people is baccalà¸ salted cod from Northern Europe (which they either fry, or else braise with potatoes, tomatoes, and olives (at Christmas), but salted fish doesn’t count, especially from Northern Europe.

My father claims that he taught my mother not only how to cook fish, but how to cook at all.  He says that when he found her, she and her sister were eating steak and drinking milk for dinner, and she does not deny this (she shared a sofa-bed with this same sister, in an apartment with their father, as a first detachment of the family’s immigration).  For his part my father, who came to America alone (“jumping the boat” he was working on), brags that as a bachelor he used to cook himself a big pot of beans on the weekend and eat pasta e faggioli all week.
Problem is, I never saw my father lift a pan or pot in Brooklyn to cook with, and he only ever took cooking utensils in hand to taste/critique what my mother cooked.  True, when he had time for it, he might man the grill in summer, or dress the great seafood salad for the big Christmas Eve dinner, but he did no cooking properly so called, at least back in the day.  Could he perhaps be credited with “teaching” my mother by way of final causality?  By way, that is, of saying very particularly what he wanted?  If truth be told, though my mother is an excellent cook, she is not an ambitious one, and she’d rather be moved by someone else’s desire than have to come up with one of her own.  Likewise she’s more likely to be prodded to innovation than herself to innovate, and my father could certainly be counted on to supply her with both desires and prods (not to mention directives and critiques).  But I don’t think final causes are supposed to do that—they’re supposed to move by being desirable, and I really couldn’t describe his behavior as desirable.

When it looks all pretty—glistening, rosy, speckled green—I add the reserved squid juice and also strain in the tomato juice from the plate (straining out the seeds), and once these cooking juices have 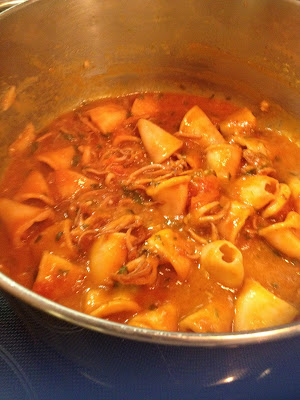 heated up to a lively simmer, then I turn the heat down to medium low, put the lid on ajar, and let all hum away for a half-hour, checking and tossing now and again.

Once the sauce thickens, glistens, and beckons, I taste the squid both for tastiness and tenderness.  If it needs salt, I add salt; if it needs oil, I add oil; if it’s not tender, I cook it some more, No?