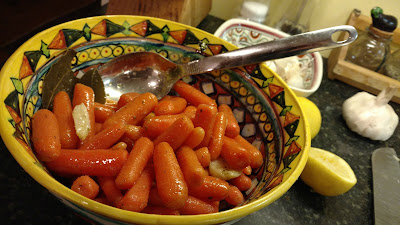 Well, we’re still working on that weekday dinner from two blogs ago, of a pork chop breaded & broiled, flanked by broccoli all'aglio e olio, a.k.a., broccoli garlicy, and marinated carrots, to be here dubbed carrots lemony.
Now in the interests of full disclosure, I must admit that not only are carrots lemony not a dish of my people, but I have introduced them into the family over the objections of my father.  Whenever anyone says how delicious the carrots are, my father may be relied upon to explain why they’re not.  He thinks they don’t taste like anything, just boiled.  Well, don’t you mind him, Gentle Reader, just let him talk.  I suspect that he would like the boiled carrots better if instead of a litte white wine vinegar with lemon I put a lot of Balsamic vinegar on them, but that would just give them the familiar taste satisfaction of his usual vinaigrette, at the expense of suppressing the flavor of carrot.
What I like about this dish is that the restrained use of vinegar to season the carrots and the final spurt of lemon juice just before bringing them to table bring the carrot flavor unexpectedly into relief, brightened with refreshing lemoniness.  People often exclaim, “They’re so refreshing!”  The dressing of a boiled vegetable with olive oil and lemon juice has a special name in Italian, all’agro, which loosely translates as “sour”.  Well, “sweet and sour” sounds good in English, and “sour cherries” doesn’t sound bad, but “sour carrots” does.   Even “tart carrots” doesn’t quite cut it.  So I go for the fun epithet lemony.

When I steeped the carrots covered in regular olive oil, I liked the result better. But then I got this bright idea:  I very generously dress them with extra virgin olive oil and keep turning them over every so often all afternoon, using friction to marinate them.  If I cant’ be bothered, then after a thorough mixing in a generous dressing of extra virgin, I pour regular olive oil to cover them and leave them to steep; when time comes to serve them, I use a slotted spoon to get them to a serving bowl.  Either way, right before going to table, I give them a nice squirt of lemon juice, and taste them for tartness, salt and spice, or even a little extra drizzle of extra virgin, correcting as needed. 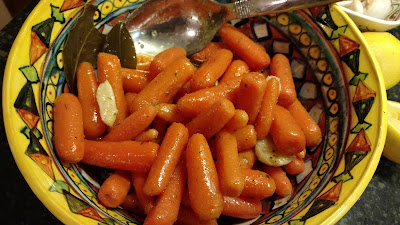 When it comes time to store uneaten babies to be ready-to-hand for another dinner or two, then I remove the smashed garlic pieces (which become too assertive over time for my taste), and store the carrots covered with regular olive oil.  I keep them in the fridge, because they don’t keep at room temperature.  When time comes to use them, I make sure to let them dechill to room temperature.  Then I take what I want with a slotted spoon, and, if in a generous mood, give them a fresh drizzle of extra virgin olive oil, and taste to see if they would like some more lemon juice or salt.
More salt?  Yes, Gentle Reader, I can’t tell you where it goes, but leftover food often loses its saltiness.  If you tell me that it can be chemically proven that the same quantity of salt is in the food as at the start, that only tells me that the quality of saltiness is irreducible to the quantity of sodium chloride it happens to occupy.  If salt loses its savor, what else could salt the salt?  What’s the use, but to add some new salt, believe it or not.
Now for another matter unbelievable:  gentile eaters cannot be relied upon to know a garlic clove when they see one.  As I’ve said before, my people often leave in the dish pieces of garlic large enough to be seen and left uneaten.  Chomping on a garlic clove is a pleasure peculiar to only a few, for a raw garlic clove assaults an assayer with a bracing pungency and leaves in its wake an unsociable odor.  But even Gentiles who have been warned will manage to take one in, bite on it, be shocked, exclaim!, and—here’s the unbelievable part—not spit it out, but swallow it whole, wincing all the way.  Given the times, I advise you, Gentle Reader, to remove your garlic cloves before bringing your carrots lemony to a tableful of gentiles.


* Boil baby carrots al dente in well salted water, with several peppercorns and a bay leaf. Drain, and while still steaming in the sieve, let them be seasoned with much salt, black pepper, and pinches of oregano.
* When the steaming ceases, sprinkle evenly all over with wine vinegar, allowing excess to drain through sieve.
* Crush a garlic clove hard against the bottom of a bowl, and use the halves to rub the bowl. Add carrots and very generously dress them with extra virgin olive oil. Flip them over and over to marinate. Let steep all afternoon. Either flip them every so often in the extra virgin olive oil, or else cover them with regular olive oil and leave them be (if you opt to cover, when time comes to serve, use a slotted spoon to remove them to the serving dish, leaving behind excess oil).
* Before serving, sprinkle with lemon juice; taste and correct for tartness, salt, and spice.
Posted by T. at 12:46 PM